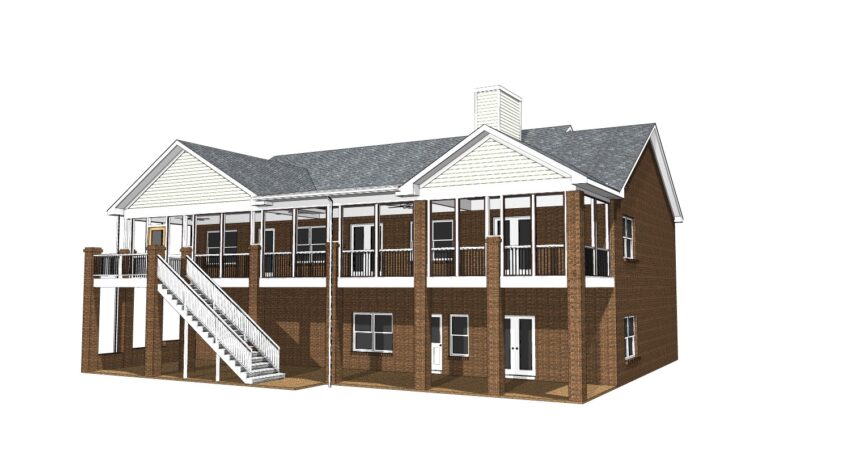 Air, water and sky : the reasons for having a lake house. Sweating in sunshine: not so much. When this lake house was first built, many years ago, the children were small and only threatening to become teenagers – you know people who lie around a lot – so a large open deck as a place to lie around in the sunshine seemed like a good idea. Even then, a phrase was often repeated: “It’s TOO HOT out there!” The children’s teen years came and went. The deck fell into disuse. The children became adults with spouses and children of their own. A family, which began as a few, became a clan of many, all of whom wanted to enjoy lakeside air, water, and sky. But it was still too hot on the deck. The original house had a little gable-covered porch but it was too small to allow the entire family, all at once, to relax and picnic in shaded comfort.

I was called to design a solution. The entire deck is covered by a roof which matches the style of the existing plan. A second gable joins the first with a shed roof between them. The framing to hold the screen panels is built against and around the original brick pillars and columns, which remain in place (image below actual). To add visual appeal as well as fall prevention, a new railing is placed inside the screening (image below next). The railing spindles are small, square, iron rods which have a low visual presence; they’re easy to see through, so they don’t block the view. A small device called a water-gate (not shown) allows drainage for blown-in rainwater. A water-gate is centered on each section of railing. The final piece to prevent insect-intrusion is a tongue-and-grooved, plank floor.

Screen Panels are outside the railing. Frames are shown as brown for emphasis.

Below, use the sliders to see Before & After images from several different viewpoints.

For all your house plan needs, call me. I’ll help you design a cool, shaded, bug-free place where you will “Love to Come Home”™