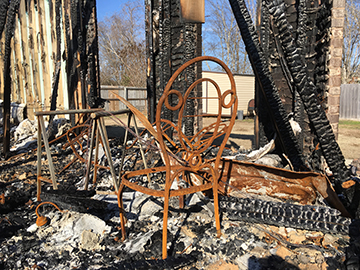 Sometimes, bad things happen to houses. Storms come. Floods come. Fire comes. Sadly, damage, even destruction, may come, too. Sometimes there are no records, no drawn plans, and damage is so complete that building-back seems impossible. For insurance companies the problem becomes valuation and restoration of a destroyed building, the appraisal of which is impossible for lack of knowledge, and documentation to define the home that was. To the rescue comes Architectural Forensics, which involves studying the left over debris, post-devastation, then rebuilding-on-paper detailed plans of the destroyed building, thus to provide the needed documentation for valuation and insurance-backed reconstruction; and is something I find very interesting.

By personal interviews, I become as familiar as possible with the condition and nature of the original house, and the primary cause of the carnage. Next, I look at the way ashes, twisted or burned bits of timbers, doors, fixtures, furnishings, and appliances – any parts of a house left on the ground after the calamity – are distributed throughout the ruins. The depth of any given object within a debris field, as well as the orientation of the final resting pose of any identifiable part, may point to where in the original house that part used to be.  To that is added data on the weather conditions during the event, such as wind speed and direction, and prevailing water currents. These weather conditions affect the direction toward which a structure will fall as it burns or breaks apart.

This collected information makes it possible to create detailed drawings of the floor plan, as well as the shape and styling of the exterior. Any holes in the information may be filled by additional personal accounts of family members, and especially impartial reports from neighbors, and past residents.

Here’s a project involving a house that burned badly, and completely unnoticed, in the middle of a crowded neighborhood. The owners were away, and no they did’t burn down their own house. The fire broke out after midnight, so no one saw or reported the blaze. The fire department wasn’t even called, until the next morning, by people who were going to work, and passing by the still smoking remnants.

Below is a carousel with a few “before” pictures to show my starting point, plus the “after” floor plan and some 3D exterior images.