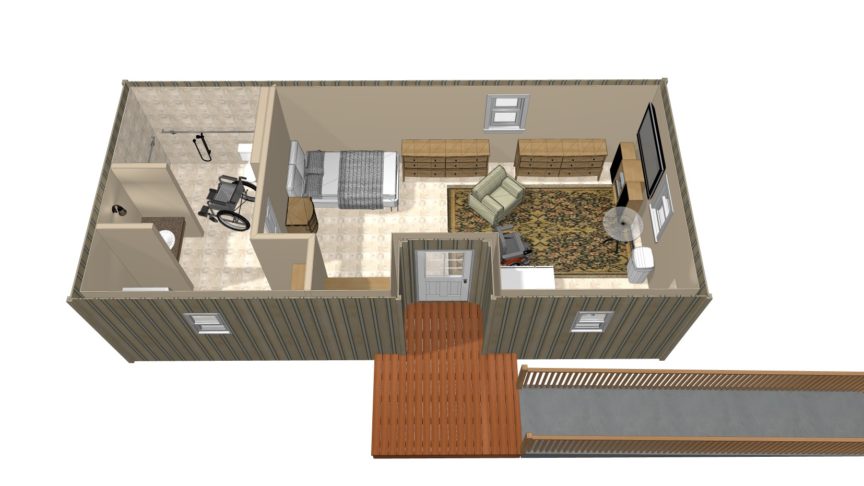 Enforce every aspect of the BEADS Keystone for any project, even a Tiny House or structure. Every job deserves every advantage.

The BEADS KEystone is part of HomeBuildingTimeline.com.

This Tiny House, built from a converted, portable tool shed, is for a wheelchair-bound individual, hence the ramp and over-sized bathroom.

The Tiny House concept is without flaw. However, the one thing most often flawed is the expectation of the soon-to-be occupant. Whether a student living small, a single person starting out, or a senior citizen finishing up, the issue which frequently raises its ugly head is not if stuff will fit in a tiny space, but if life feels right in a one room shed. In a regular house, rooms are attached to and around one another, each effectively bracing the others against most forces of Nature.

A tiny house, however, in most cases, is a single room weather-exposed on all sides, standing entirely on its own. Every breath of wind against its walls is both heard and felt on all sides all the time. Every raindrop, pattering or pounding, can be heard beating the roof like a drum in every squall and tempest. Surround-sound from a music system has nothing over the all-engulfing knock and sway suffered by such a diminutive domicile.

The onslaught isn’t limited to walls and roof. There’s also the floor. Typical tiny-house installations involve a structure being made in a factory, then transported to a homesite to be slid off a trailer, pry-barred into position and lifted onto pre-planned foundations – probably concrete blocks. The space between the ground and the floor’s underside is like a party-house for vermin. All manner of lifeforms – mammals, reptiles, amphibians, and insects – have only one goal concerning a tiny house: live in its shade or get inside. The point is, the space under the house cannot be left open.

It’s important to install un-gnawable skirting all the way around the tiny house. Materials that work include galvanized metal, iron plates, brick, stone, concrete block – in fact any masonry with thoroughly sealed mortar joints to prevent crawling, slinking, and slithering through.

What won’t work for vermin control?

Regular homes are often built with heavy-duty floor joists, which provide a solid ‘feel’ for walking around in the house. By contrast, tiny houses and their cousin the portable tool shed are often built with light-duty floor joists. For a permanent residence the resulting soft-and-bouncy feel can be unpleasant. Even in a very small space there’s an expectation of comfort which is delivered by the ‘feel’ of a solid floor. This problem is easy to overcome if approached early in the planning process. Simply request that the maker include heavy-duty floor framing. Many already do.

Made-for-living tiny houses usually come with wall framing already in place to offer years of robust life for the structure. It’s the same with components of weather resistance – siding on the outside covering sheathing to impede wind and moisture intrusion covering between-the-studs thermal insulation, such as batts or foam.

The same can’t be said about portable tool sheds converted for living. Wall studs are typically spaced far apart, there’s no sheathing, and insulation is not a standard feature. Siding is just nailed to the outside of the wall framing, and that’s that. Why would it be any different? It’s a tool shed. To convert a portable tool shed to a tiny house, make sure to upgrade the framing and include sheathing and insulation.

In most cases for tiny houses and tool sheds the roof doubles as the ceiling. This means there’s a thin separation between the inside and outside. Heat and noise transfer easily. Structures intended for tiny house living will probably be robust and include sheathing and insulation. As with the walls, this insulation not only helps restrict the flow of heat, but also diminishes the resonance of outside noises.

Tool sheds, however, are not initially intended to offer heat and noise protection to boxes, bikes, tools, and stuff that has nowhere else to stay. A conversion of a tool shed will need to include upgrades for roof framing, sheathing, insulation, and whatever interior ceiling surface is desired, such as drywall or wood planks. Heat and noise may then be controlled for a tool shed in the same manner as a made-for-living tiny house.

A hardy structure has more to do than stand against weather. Minute-by-minute changes in temperature and humidity inside and outside will cause expansion, contraction, skewing, swaying, and deflection in the shape of every part, floor, wall, and ceiling. Anything attached to those distorting parts is in danger of being distorted itself. In particular, bathroom tiles, which are brittle, installed on top of floors and walls, which are in the process of distorting, can break at the grout joints as well as mid-tile. Initially, this will be unsightly, but will soon become a safety hazard as tripping points. Strong, resilient framing will be more able to resist variations caused by inside and outsides climate ranges. Though made-for-living tiny houses may already come ready for tiling, tool sheds won’t. In every case assure that the structure will be wholly stout and strong.

Other aspects, like insulation, wiring, plumbing and sewage, and air-comfort conditioning must also be handled. Local conditions and building codes will dictate what’s required.

It’s entirely possible to live in a tiny house, as long as expectations are seen with eyes wide open and tempered with the reality of almost living outdoors on all sides.

There you will find step-by-step guidance for any home building, addition or remodeling project.